I once had an old beat up red car. It was a little red station wagon. If you travelled over a certain speed the speedometer would spin around madly as if it was possessed like in a Stephen King novel and it would make a hell of a racket, too, with the needle banging against the glass. In those days, we listened to cassette tapes in our cars and I remember I was listening to a Beatles record, Rubber Soul or Revolver? - when one of the speakers stopped working. All of a sudden all I could hear was George’s guitar and the drums. That was an epiphany! Previous to that I had taken the music as a sum, listening to it all at once (as it’s meant to be heard), experiencing it emotionally. But now I could hear the different parts and how they would come in and then disappear for a while, then come back in again. The drums could be panned to one side and the vocals on the other. Mind expanded. 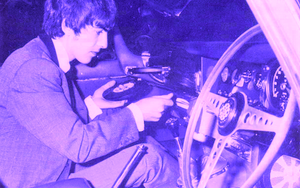