A Song Being Born Every Moment 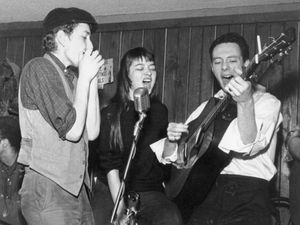 Karen Dalton’s song comes out of the dark night of experience, singular and alone and very human and speaks directly to our souls. We hear every emotion, not a performance, just a song being born every moment. The song of authentic experience.

If only we could hear more voices like this.

If so, perhaps humanity might slow down and take more of a reckoning of the truths of existence - the heart, the soul, the implications of one life upon another life.

If only we could hear more voices like this.

But how can we? Everywhere we go we hear the sound of shallow. The supermarket, the gas station, even the garden beds at the Nashville Malls spew the ugly sounds of bro country at our victimized ears.

The sound of so-called popular music attacks us everywhere. Shallowness rises to the top and clangs like an ugly bell, “Look at me, look at me!”

Empty vessels making the most sound and rising to the top of those playlists clanging in our ears, “Look at me, look at me!” Not truly popular, but actually enforced.

Karen Dalton’s voice. If only we could make the space for more voices like this.

The voices of humanity, not music business.

A music business that historically has told women to put down their instruments and just sing… and dance and wear brightly coloured clothing.

And to sing “perfectly,” not like true perfection, but like wonder bread, which dissolves in an instant because it is hardly there. A business that celebrates copies rather than originals.

Karen Dalton’s voice, not separated from her instrument - guitar or banjo - but the same one sound, the same one song. Not one apart from the other but interwoven, threading and plaiting.

At age 32 her voice is a kind of ancient. She sounds like a woman who has a thousand years of experience singing a song of all ages.

But the vacuous clang clang clang of contemporary existence fills our ears so that we forget what a song is meant to be - that human being aliveness.

That is, real people living genuine lives and every now and then making a record. Not dressed by stylists, tuned by engineers and photoshopped by graphic artistes. Imagine if the goal wasn’t fame and fortune?

Heroin, hard drugs, amphetamines. There but for the grace of the goddess go many of us who thought we were immortal when we were young, or who didn’t care whether we lived or died, who were on that quest for an interesting life, who would try who knows what to feel that next experience. And while upper class opioid addicts called their doctors for a prescription, artists like Karen Dalton and Kurt Cobain grubbed around the streets only to find black gunk to shoot into their veins.  Imagine if they could have just got good quality drugs and continued with the rest of their lives?

Saw a friend the other day

He was sorry I’d gone astray…

My sin was the sweetest love  ~ Karen Dalton

The soft voices are there. It’s just a matter of dulling out that clang clang clang of the mainstream and listening, really listening. Searching out and finding that new music from the past.

Karen Dalton is the kind of artist who was drowned out by loud people with big elbows. But her beauty is infinite and now we can hear it.

All that shines is not truth

All that glitters does not shine

So I find ~  Karen Dalton

The film Karen Dalton - In My Own Time is out now.